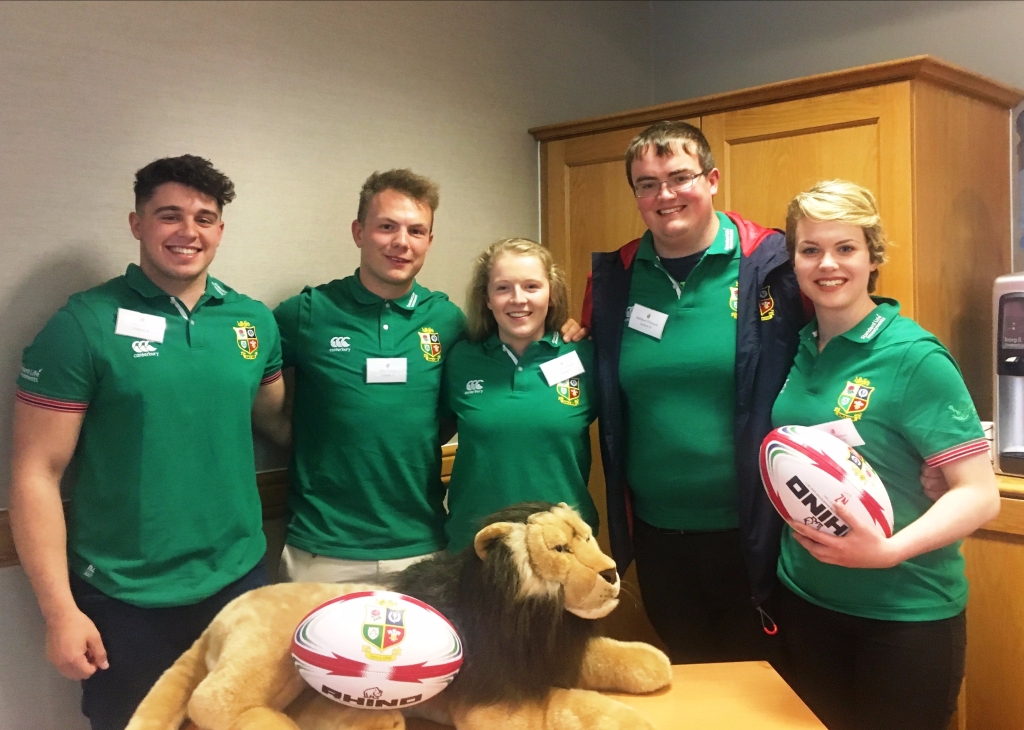 Congratulations to first year Sport and Exercise Sciences student Meadhbh Lewis, who has been selected to accompany the Lions Rugby team on its upcoming tour of New Zealand as an ambassador to the team.

In April, Meadhbh discovered the Lions Ambassador programme and the process involved to become a British and Irish Lions representative. This interested her hugely given her passion and commitment to Rugby. A massive supporter of Munster and Irish Rugby from knee high to a grasshopper, she has always been involved in the game in some shape or form. However it wasn’t until her arrival at UL, that she got her first opportunity to play which further enhanced her love of the game.

For her Lions application, Meadhbh recorded a short 2-minute video explaining why she believed she would make the perfect Lions Ambassador. A testimonial from a coach or committee member was a requirement of the application process, and University of Limerick Ladies Rugby Coach Fiona Reidy provided a glowing endorsement on how Meadhbh represents the values of rugby.  News eventually came through from the IRFU that Maedhbh’s application was narrowed down to the top five in Ireland (an honour in itself) and she was invited to the Lions selection day in London on the 29th April, which she joyfully accepted!

On the selection day, the top five potential Ambassadors from Wales, Scotland and England met each other and completed a task to assess their communication, teamwork and leadership skills.  The final task was an interview with Tour Manager for the British and Irish Lions 2017, John Spencer who assessed each candidate’s knowledge of the Lions tour.

On May 2nd, the call Meadhbh was hoping for, came through and the twitter feed went crazy!  Along with eight others (2 Scottish, 1 Welsh, 3 English and 2 Irish) she will accompany the Lions as they take on the All Blacks in a three test series. Leaving on June 12th, Meadhbh will spend 15 days going to matches, documenting her experiences and meeting players from local clubs in New Zealand. Her job will be to report back to Ireland about her experiences of the tour, promote the Lions and grow grassroots rugby in Ireland. In Meadhbh’s words, “A truly unique experience!”

Following on from the Lions tour, the Women’s Rugby World Cup (WRWC) will take place in August in Dublin and Belfast. Meadhbh is also an Ambassador for the WRWC and carries out WRWC promotional work primarily through social media. In addition to volunteering at all the match days in August she will also organise bus transportation from Limerick to Dublin for the games as she did for the 6 Nations tournament.  Meadhbh attended the launch of the domestic Pro12 league last August, and interviewed both players and coaches and has carried out interviews on BBC radio analysing Irish rugby performances.

PESS wishes you the best of luck for the Tour and looks forward to hearing about it when you return for 2nd year !