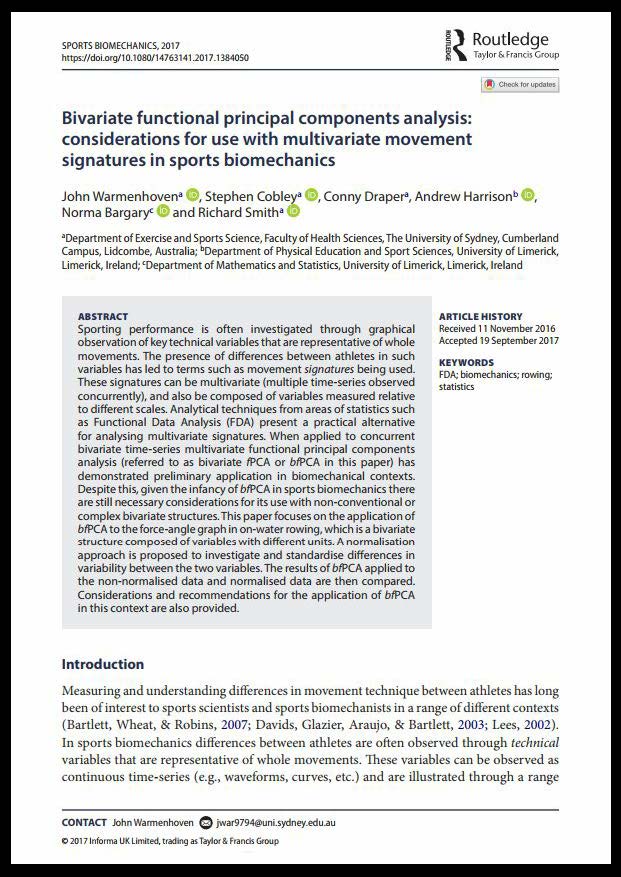 Abstract:  Sporting performance is often investigated through graphical observation of key technical variables that are representative of whole movements. The presence of differences between athletes in such variables has led to terms such as movement signatures being used. These signatures can be multivariate (multiple time-series observed concurrently), and also be composed of variables measured relative to different scales. Analytical techniques from areas of statistics such as Functional Data Analysis (FDA) present a practical alternative for analysing multivariate signatures. When applied to concurrent bivariate time-series multivariate functional principal components analysis (referred to as bivariate fPCA or bfPCA in this paper) has demonstrated preliminary application in biomechanical contexts. Despite this, given the infancy of bfPCA in sports biomechanics there are still necessary considerations for its use with non-conventional or complex bivariate structures. This paper focuses on the application of bfPCA to the force-angle graph in on-water rowing, which is a bivariate structure composed of variables with different units. A normalisation approach is proposed to investigate and standardise differences in variability between the two variables. The results of bfPCA applied to the non-normalised data and normalised data are then compared. Considerations and recommendations for the application of bfPCA in this context are also provided.