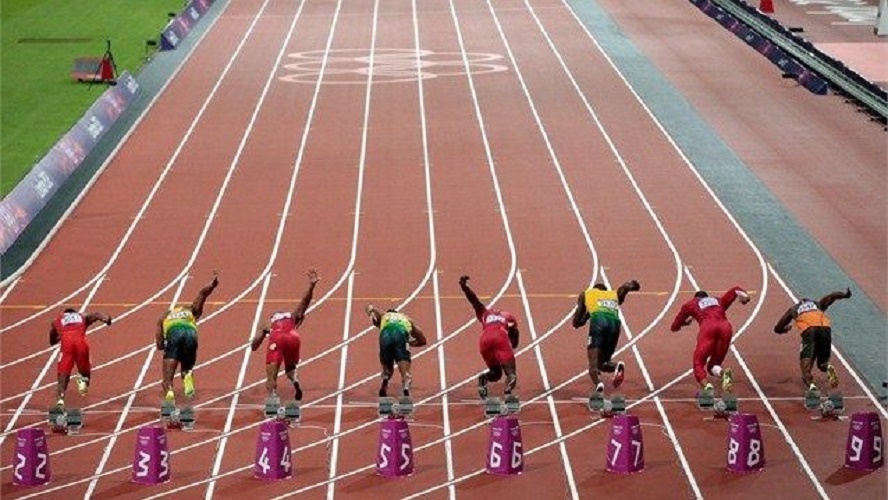 In this blog, I hope to demonstrate my experience as a track and field athlete, to how I became a sports science PhD research student.

In 2008, I went to Leeds Metropolitan University to study Sports Performance; I left with two bags and running spikes. It was the first time I had a training group and a sprints coach, named Neil Holmes (no relation). I chose to leave Ireland because there was no Sports Performance Degree in Ireland at the time and the University had a strong athletics team.

I met Neil and joined his training group. After two weeks, we sat down and planned the year out. As it was my first year training for athletics, we set no specific times but picked three competitions to peak for. Training 6 days a week was a struggle at the start as was adapting to lactic training and Olympic lifting. Athletics training is different from most sports, for the simple fact, I had trained for seven months before I completed my first 100-metre race. I was anxious, had the months of training paid off? First race, hand-timed 11.20 seconds, the alarm bells were ringing. Just 10 Days later the British University Championships (BUCS) were on, I broke 11.00 3 times, reaching the 100m final, what a relief results were better than expected. I represented an Irish relay team under the renowned sprints coach Professor Drew Harrison a few weeks later in Belgium. I finished the season with a best of 10.70, several Irish vests and silver 100m medals in the Irish Under23 and Senior Championships behind Jason Smyth.

The second season expectations had grown. I wanted to run sub 10.50 for Athletics Ireland funding and 10.55 for European Under23 Championship qualification the following year. Neil planned training and competitions for the season. First 100m of the season 11.21, which alarmed me. Having put a greater emphasis on strength and conditioning & nutrition in addition to track sessions, had it backfired? BUCS 2 runs in the 10.7s and one 10.81 and 4th place, agonisingly missing out on a medal by 0.01. In the Irish U23 championship heats I won my heat in 10.55 European U23 qualifying time, only for it to be deemed illegal with a 2.1 wind reading, and I finished 3rd in the final 0.006 seconds separating the top 3. The margins were minimal, so close to the perfect day. I won the Irish 100m Senior Title and competed at the Diamond League final in front of 40,000 running a PB of 10.60. Bottom line the season overall was seen as a success but felt like I left it behind, it could have been so much more with a legal wind reading for the 10.55 race or 0.01 faster in the final of BUCS or U23 championships, small margins.

I had taken on an additional coach John Shields in Ireland, culminating in more experienced coaching and training group. I was still on a high after the Diamond League final, I decided against the advice of my coaches of taking a normal break; I took only one week off before pre-season. I thought I was gaining an edge on my competitors, in Autumn I was smashing training. Of course, my body started to struggle with injuries and the onset of shin splints; my decision majorly backfired, costing me valuable training sessions, limiting me to gym, pool, bike and cross trainer sessions.

Neil, physios and sports nutritionists worked tirelessly and performed wonders to get me in race shape. I arrived at BUCS with less than two weeks of track sessions in the previous two months. I struggled with fitness to get through three 100-metre races but managed to finish fourth, 0.07 behind the winner and 0.02 behind second.

Three weeks later, just three weeks before the European Under23 Championships, we had U23 relay practice, two athletes didn’t turn up, meaning I overtrained the day before the Irish U23 Championship. In the heat, I had the start of my life; I was transitioning from the acceleration phase into max velocity, I felt my hamstring go, I hopped over the line on one leg trying to qualify for the final. An MRI showed I had torn my hamstring. Immediate recovery was now a priority with cryotherapy treatment and my physio doing everything possible to get me fit for the European U23 Championships. The night before we were due to fly out, Athletics Ireland decided to pull the 4 x100m relay team due to my injury. The support I received at the time from everyone around me was immense, and I had planned to attempt to defend my National 100m Title. I also aimed to train full time with professional athletes the following season.

Five weeks later, I was involved in a car accident and suffered an injury that finished my season and I later discovered my athletics career. I was in the early stages of an athletics career, but had been fortunate with my support system of; training partners, sports scientists, medical team, Kilkenny City Harriers, coaches Neil and John and my family and friends that gave me the opportunity to achieve what I did. Working with elite athletes in high-level sport was my dream at the time.

Athletics was and still is a massive passion of mine. I was delighted to start a Research PhD on Mapping responses in the sprint start in athletics in 2016 under the guidance of Professor Drew Harrison and Dr Kevin Hayes in the University of Limerick. I now have the opportunity to research the small margins of sprint performance, including testing sprint athletes. Instead of competing as an international athlete, I get to test these athletes, using world-class equipment and facilities. I have had the privilege of presenting sprint start research internationally. I am very lucky to have the opportunity to study in the research area I am passionate about with a great support team in PESS from fellow PhD students, my supervisors and PESS faculty members.

Jonathan Holmes is a postgraduate research studying for a PhD  at the Department of Physical Education and Sport Sciences at the University of Limerick.  His current research interests include “Mapping Responses in the sprint start in athletics”.  Contact Jonathan via email at jonathan.holmes@ul.ie or view his research profile on Researchgate