The GOGREEN initiative is led by PESS department member Dr. Tadhg MacIntyre as part of the Physical Activity for Health cluster at the HRI. It includes research on Woodlands for Health, with partners Coillte, Get Ireland Walking and Mental Health Ireland, a Pan-European project GOGREEN ROUTES (now funded) and most recently a project proposal for GOGREEN NATURE. 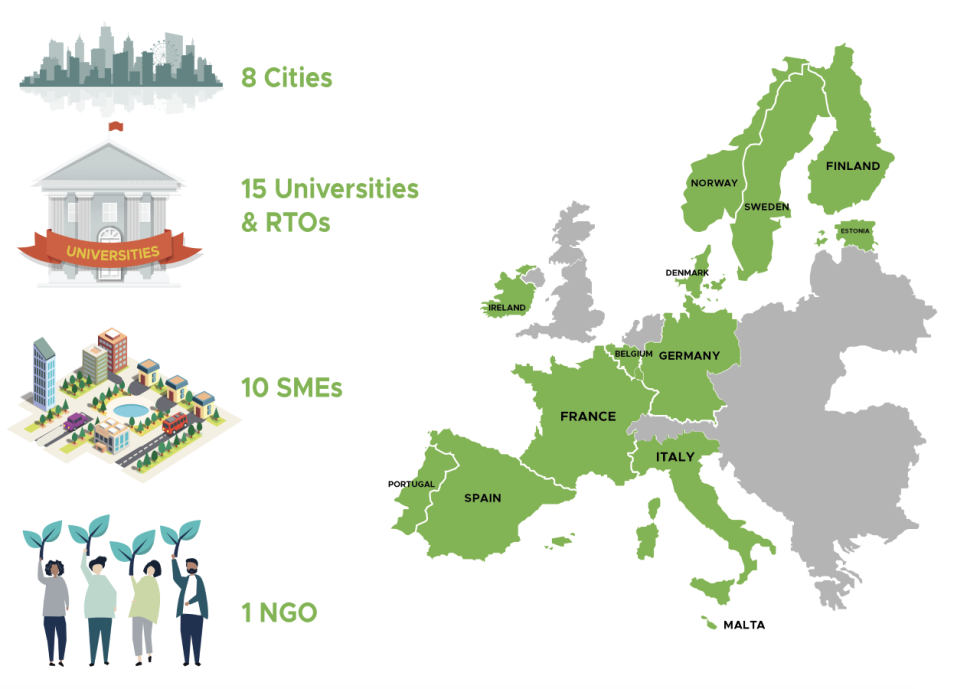 Cassie: I first met Tadhg during the second semester of my masters in psychology where he taught Applied Positive Psychology. We connected over a mutual appreciation for all things well-being and nature related. Having grown up on an island beside the sea (Valentia island) I always felt a deep connection with the ocean and the countryside. When the stress of college would get too much for me I would scurry home to Kerry for some respite. I got in contact with Tadhg in September when I was in the middle of my job hunt and he told me all about the exciting plans he had in store regarding the GOGREEN initiative. My research background was in acculturation and adaption, so it was interesting to take a different route.

The work itself was at times challenging, especially with the tight deadline, but overall a great learning experience. As a lover of travel and culture I not only got to learn about cities I had never heard of or been to, I got to see the ones I as familiar with in a different light. Before this project I would have never considered the percentage of green space in a city, or how they were performing in working towards the UN sustainable development goals. If anything, I learnt how to be a more sustainably conscious traveller.

One of the main skills I developed with this project was thinking outside the box. The proposal is one of many being considered so we needed to think of new and creative ways to make it stand out. As Tadhg would say: “three brains are better than one,” especially when it comes to creativity. This creativity skill also transferred to the need for infographics in this project. Honestly, that was a term I had never heard of before I got an email from Tadhg asking for one. I agreed and hoped for the best. Luckily it turned out right! (see image below). We used Piktochart software to develop our infographics and then we sent them to a graphics company, CUBE Design, for final touches.

The feeling of relief and pride on the day of submission in indescribable. While I still can’t tell the difference between different air pollutants I am more than confident that the GO GREEN NATURE project will help reduce some of them!

Ellen: As a part of my experience as a research assistant on the GO GREEN initiatives, I have acquired many new skills and met some interesting people along the way. I first started work with Tadhg last summer, as a funded research associate on the proposal for GO GREEN ROUTES (funded 10.5m project). The project was very interesting to me and I think that this topic of nature and well-being is becoming increasingly pertinent in today’s world. Being involved in the preparation of these proposals allowed me to work outside my comfort zone and learn new online tools such as Qualtrics. I was introduced to the other research assistants from Germany, Susan Gritzka and Dorothea Schoenbach, and it was nice to get to work alongside equally driven and motivated students.

In January, I got another opportunity to help out with another phase of the GOGGREEN initiative, in the preparation of the GO GREEN Nature proposal deadline on the 13th of February. I was working alongside, Cassie, one of my close friends and a fellow psychology student. I travelled to TU Munich campus near Munich airport at the end of January to assist at a pre-submission partner meeting. This was a really great experience for me and helped me to get more familiar with what was involved in the project. I also had the chance to network with some very interesting people from different European countries. I have been very lucky to be involved with these projects and I am excited to see what happens in the future. There is so much potential and a wide range of research opportunities linked to the project. Myself and Cassie worked together to meet this deadline and we communicated through use of several google documents and kept up to date with the different iterations within the project.

Having just finished a Master’s degree in psychology last year, it was interesting that we could put our knowledge of psychological theories to use within the projects. It is clear that the benefits of nature for people’s overall health and well-being is finally getting the recognition that it deserves, and we are proud to have been involved in such a relevant project. Here’s hoping we move onto the next phase.

GOGGREEN is an acronym for Going Outside: Gathering Research Evidence on Emotions and Nature. Cassie Murphy and Ellen Moran were both funded by an Enterprise Ireland Horizon Coordinator Support Grant awarded to Tadhg MacIntyre. Cassie is currently working as a voluntary assistant psychologist with women and children who have experienced trauma and hopes to continue working with Tadhg on the GO GREEN initiatives and progress to doctorate level research.